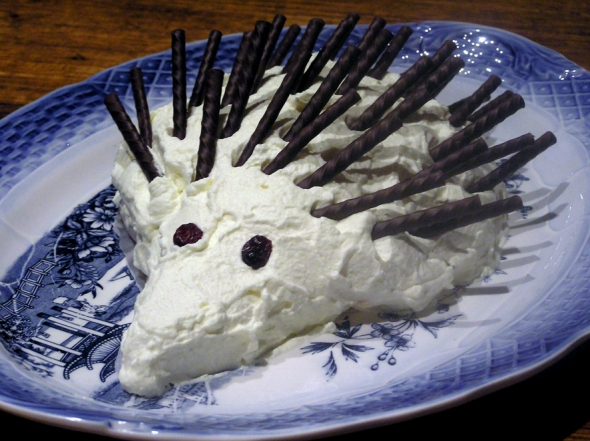 Dear Amelia,
Down here in the land of purple utes and visible bum cracks, Australia Day celebrations are taken very seriously.
You’re buggered unless you have at least two Australian flags attached to your car roof, four cartons of Crownies in the boot and a Staffie whose upper body is hanging out the car window.
If you don’t own a Staffie and can’t borrow one from a mate, you could probably avoid being called a poofter by having Cold Chisel’s Khe Sanh blasting out of your car radio while you lay some rubber in the Middleton Beach car park.
Or, if you’re looking for something slightly more sophisticated, you could stay home and make an Echidna Pavlova.
I think every boy and girl should have an Australia Day recipe up his or her sleeve and this Echidna Pav is perfect.
It comes from the book Sheridan Rogers’ Food Year, which is very good but now out of print.
You can visit Sheridan Rogers’ website here.
The pav is supposed to serve 6, but the way I make it, it feeds 35.
This is because it’s so sweet, you can’t eat more than a couple of mouthfuls.
That said, it’s perfect for those Australia Day barbecues where everyone is as smashed as rats and is likely to throw up anyway.
Sheridan Rogers’ version probably isn’t as sweet as mine because she uses fruit (nectarines, apricots or peaches) cut into 5mm batons for the echidna spines.
I used After Dinner Mints – the ones shaped like sticks – because it was easier.
Sheridan doesn’t put eyes on the echidna’s face either but I had some dried cranberries in the pantry and thought what the hell.
Currants or sultanas would be just as good.
Blue M&M’s, I think, would be really special because you could tell people they were a metaphor for our iconic, wide, blue Australian sky.
Very patriotic and less hassle than borrowing a Staffie.

Preheat the oven to 120C and line a baking tray with baking paper.
Whisk the egg whites with half the sugar until they’re stiff and shiny.
Fold in the rest of the sugar along with the vanilla essence, vinegar and cornflour.
Put dots of this meringue mixture under each of the four corners of the baking paper to “glue” it to the baking tray.
This is so it doesn’t slide around when you’re fashioning the echidna’s body.
Spoon the meringue mixture on to the baking paper in an oval shape, stretching it out at one end to make the pointy echidna face (see picture after the recipe).
Bake it for one hour, then turn the oven off, but leave the pav in the oven for another 30 minutes.
Remove it from the oven and let it cool completely.
Whip the cream until it is quite stiff. If you don’t, the “spines” will slide off the echidna’s bum.
Put the echidna on a platter, cover it with whipped cream and stick the After Dinner Mint “spines” in the body section.
Place the eyes of your choice on its creepy little face.