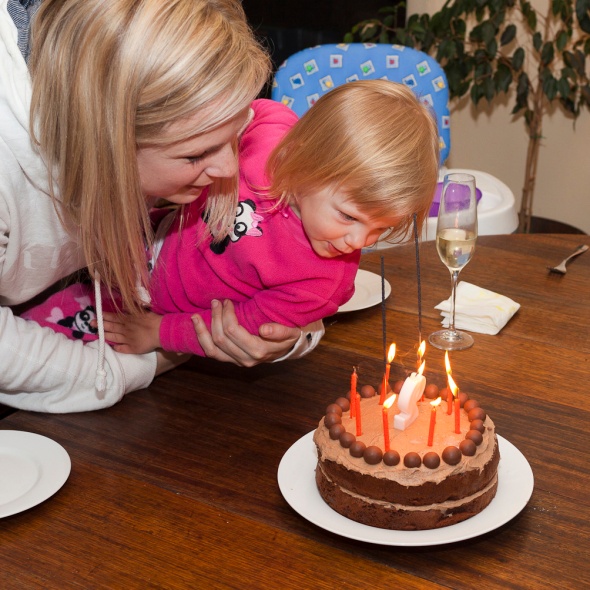 Dear Amelia,
I know.
Another Chocolate Malteser Cake.
But in my defence:
1. You LOVED it.
2. It seemed fitting that your second birthday should be celebrated with the same cake I baked for your Great Grandma’s 80th.
3 (and more to the point). I paid $10 for the Horlicks malted milk powder that was listed in the recipe and, according to the stamp on the bottom of the Horlicks tin, I’ve only got until August 2013 to use up the absolute shitload that’s left.
Luckily for you, every cloud has a silver lining.
As in, whatever is left in the tin by the time your third birthday rolls around will have already gone to Horlicks Heaven.
So Nanna will be forced to make something different.
Something like this maybe (we’d have to change your name to Jayden but I think it would be worth it).

It was a lovely birthday weekend – lots of kisses, lots of cuddles and lots of games (my favourite being the running-in-circles one called “round and round and round and round and round and round and JUMP” – if only all of life was that simple).
And even though it says in “Advice After Abdominal Surgery” that you shouldn’t pick up anything heavier than a kettle of water, Nanna decided to live on the edge and managed to pick you up a dozen times without anything nasty exploding out of her belly button.
Speaking of which, after you’d gone to bed and we’d eaten our body weight in cake, your Mum, Dad, Grandpa and I settled down to watch TV and it was at this point that your Mum started to shout, “Ooh, ooh, ooh.”
At first we thought her vital signs were shutting down due to Malteser overload but it turned out she’d come across one of her favourite programmes and was very excited.

This programme is called Embarrassing Bodies and it is truly wonderful.
Three minutes in and I was like iron filings to a magnet.
I can’t believe I’ve never seen it before – in the OMG stakes it knocks Bethenny and the Real Housewives (except maybe for crazy-eyes Ramona) into a cocked hat.
Here’s what happens: a bunch of doctors get in a van and drive around England looking for people who have things wrong with them that are so embarrassing, they can’t discuss them with anybody else.
For example, there was this lady who wouldn’t take her clothes off in front of a bloke on account her unfortunate hoo hoo (as they say in the classics).
So she took all her clothes off IN FRONT OF THE TV CAMERA and sure enough her labia were practically grazing her knees and now every bloke in England, Scotland, Ireland, Wales, Australia and, for all I know, Ecuador and the Democratic Republic of Congo, knows about it.
When I say “every bloke” I actually mean every bloke except for your Dad, who suddenly became engrossed in his iPhone, and your Grandpa, who said, “I’m not watching this crap,” and went to bed.
Not that your mother and I noticed for a while because by then we were captivated by an anal skin tag on another lady’s bottom.
Anyway, long story short, I had to make it up to your Grandpa with one of his favourite pies.
This pie is based on a recipe by my friend Margaret Johnson (restaurant consultant, food writer for The West Australian newspaper and all-round good sort) and it’s pretty yummy.

Heat the oil in a big frying pan over med-high heat, brown the diced chicken, then remove it to a casserole dish or saucepan.
Cook the onion, bacon and mushrooms in the frying pan until the onion and mushrooms have softened.
Put with the chicken in the casserole.
Pour over the wine and enough stock to just cover.
Add the thyme, season with salt and pepper and partly cover with a lid.
Bring to a simmer on a medium heat.
Turn the heat to low and cook for about 45 minutes.
Let the mixture cool then pour into a pie dish.
Cover with puff pastry, brush with beaten egg and poke a couple of holes in the top to let the steam escape.
Bake in a preheated 200C oven until puffed and golden brown (about 30 minutes).