← A NEW YEAR, A NEW BABY AND A NICE BIT OF DUCK
STRAWBERRIES, ALEC BALDWIN AND SATAY PORK → 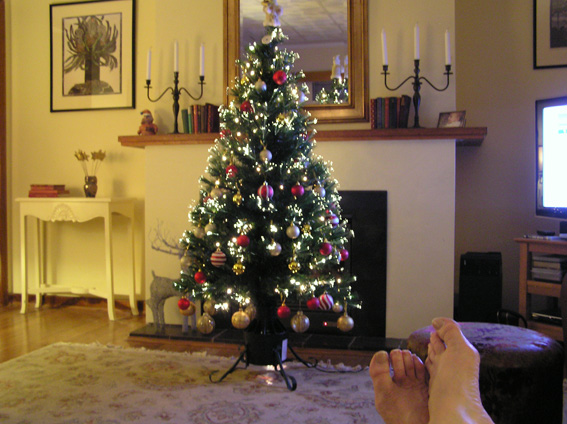 Another gratuitous shot of our Christmas tree, taken last night. You’ll notice Nanna’s toenails could do with a trim.

Dear Amelia,
I made strawberry jam this morning from some of the bargain strawberries I mentioned in my last letter.
The whole process made me feel like a proper Nanna – the sort who smells of vanilla and wears face powder and big knickers and has a brooch pinned to her frock.
I’ll bring a jar of my strawberry jam when we come to see you at Christmas and we can stuff ourselves with it before everyone else wakes up.
It’s likely I won’t have time to write another blog post before then because it’s odds on I’ll either be busy with work and last-minute shopping or too full of booze and food to be of any real use.
Before I go I’d like to wish everyone who reads this blog a very happy and safe Christmas.
It’s been wonderful this past year to get emails from people from all over the world.
I know the Internet has its downsides but you lot certainly aren’t one of them.
May Santa bring you everything you wished for.

Preheat the oven to 150C.
Put three saucers or small plates in the freezer for jam-testing later.
Wash drain and hull the strawberries and cut them into halves or quarters if they’re huge.
Put them in a really big pan (I used a pasta pan) with the water and lemon juice and cook gently, uncovered, until the strawberries are soft.
While that’s happening, look at the huge mountain of sugar you’re about to use, think about how it will desecrate the temple that is your body, then put the sugar in a big bowl and warm it in the oven for 6 minutes.
Wash five or six jam jars and their lids in hot soapy water, rinse thoroughly, drain well and put them on a baking sheet ready to put in the oven.
Don’t touch the inside of the jars and lids when you do this or you may die later.
Add the warmed sugar and JamSetta to the strawberries in the pan and heat gently until dissolved, stirring constantly.
Bring to the boil and boil vigorously for about 10 minutes, stirring occasionally.
Quite a bit of pink scum (frothy stuff) will rise to the top of the jam while it’s boiling. Remove it with a slotted spoon and dump it in a bowl.
While the jam is boiling, put your tray of jam jars and lids in the oven to complete the sterilisation process.
Test if the jam has reached setting point by putting a teaspoon of jam onto one of the cold plates and leaving it for 30 seconds.
It’s ready when you run your finger through it and the jam crinkles.
If this doesn’t happen keep boiling and testing until it does or until you think, ‘I really don’t give a shit anymore,’ which is what happened to me.
Remove the jam from the heat and let it stand for 10 minutes.
Ladle it into the hot jars with a ladle that was washed and rinsed along with the jam jars.
Fill the jars right to the top and put the lids on straight away.
You’ll probably have a little bit of jam left in the bottom of the pan that won’t fit into your jars.
Eat it all with a spoon.
Lie down and wish you hadn’t. 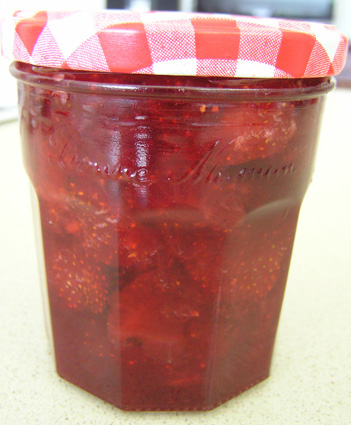 Look at all those yummy strawberries. It must be where the expression “jam-packed” comes from.

2 Comments on “HO HO HO AND FIVE JARS OF JAM”