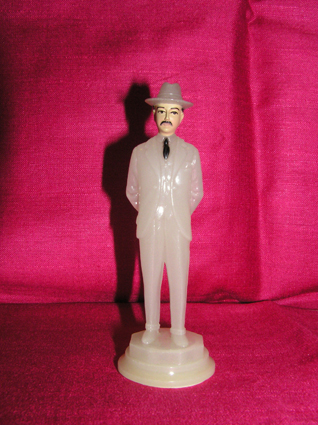 This is Senor Hernandez, the Patron Saint of Dodgy Deals. Like all saints worth their salt, he glows in the dark. He was bought for me by your Mum many years ago and sits next to my computer, watching over me with his beady black eyes.

Dear Amelia,
I once read in a Barbara Vine novel – can’t remember which one – that being superstitious means you’re lower class.
I suppose we should take it as read, then, that the Queen never passed one of her newborn children through a rind of cheese to ensure a long and prosperous life.
And it’s probably just as unlikely that Prince Charles hung all his elephant pictures facing the palace doorways, it being unlucky to hang them any other way.
In case you’re wondering, I haven’t done either of these things but I would have if I’d known about them because I’m very lower class.
I’ve knocked on wood so many times in the past 60 years my knuckles are coveted by Ikea for their realistic wood grain patterns.
What I don’t know about black cats, white butterflies, dead bees and seagulls that fly in threes could be engraved on a dog’s toenail, so long as that dog wasn’t howling in the house of a sick person, in which case I’d cack myself.
Your Grandpa isn’t superstitious at all.
Unlike me, who spends a lot of time counting the number of Xs on the palms of my hands, your Grandpa spends a lot of time watching the History Channel.
This is how he knows that Syria banned yo-yos in 1933.
Indeed, Syrian police confiscated all the yo-yos in the land because it was thought they were causing a drought.
Your Grandpa believes that if I had been in Syria in 1933 I would have been a yo-yo confiscator.
He’s probably right. But I would have been a happy yo-yo-confiscator because I would have been in the land of quinces, Syria being fairly prominent in the quince-growing arena.
Syria may have its faults, but enhancing its core competencies quince-wise isn’t one of them (I hope you’re impressed by that phrase – I like to think my time working with local government hasn’t been for nought).

The quince is native to several stans – Uzbekistan, Tajikistan, Pakistan, Afghanistan – and also to Kashmir where it’s known as the bumtchoonth.
It’s said that the forbidden fruit Eve bit into in the Garden of Eden was not the apple but the quince.
Personally I can’t see it being true unless Eve had the teeth of a white pointer and/or access to good dental care.
This is because quinces are rock hard when raw.
I love quinces but rarely see them in the shops, so I planted four quince trees down the bottom of the garden a few years back.
Sometimes these trees bear fruit that could best be described as “wormy”, which doesn’t bother me because I just cut out all the manky bits and boil the shit out of what’s left.
I say “boil” but I should say “poach” – and poached quinces are something to behold, turning from hard, yellow chunks into toothsome rosy pieces that are fab with ice cream.

They freeze really well, so you can eat them year-round.
You can also turn them into quince paste, which I’ve never done because why bother when you have a friend called Lizzie who does it so well?
Here is a picture of Lizzie’s latest batch, delivered on Saturday night. 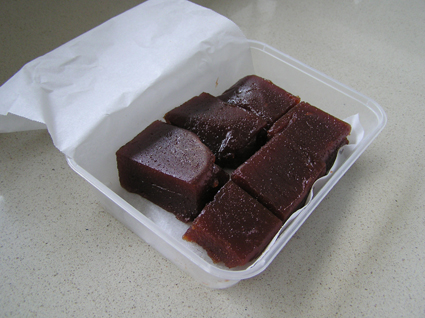 Quince paste is delicious with cheddar cheese and is synonymous with Maggie Beer, a TV chef I can’t watch because her silly breathless voice and little-girl mannerisms make me want to slap her and shout, “How old are you for God’s sake?”
Maggie flogs it via Woolies and Coles for about $50 a kilo.
You can make your own quince paste a lot more cheaply using this very good recipe from the Australian Women’s Weekly.
The quince-poaching recipe I use is from David Lebovitz and you’ll find it here.
It’s dead easy so I hope you give it a go one day.
Before I go I’d just like to say I hope your Mum hasn’t let a ferret or a weasel jump over her pregnant stomach.
If she has, you need to tell her she can undo the bad luck by putting a spider in a walnut shell and wearing it on a string around her neck (this also wards off the plague so basically we’re killing two birds with one stone).

Dear Amelia,
I’m sorry I haven’t written much lately.
It’s because a lot has been going on, some good and some very bad.
The very bad is that your Uncle Paul was diagnosed with Type 1 diabetes a few weeks back and it’s knocked everyone for six.
He wasn’t feeling well, so went to the doctor, who ordered some blood tests.
Next thing you know it’s 7.30 the following night and his doctor’s ringing him to say go to hospital immediately, you’re in danger of slipping into a diabetic coma.
So he did (go to RPH, I mean), and now he’s injecting himself with insulin four times a day.
No type of diabetes is good, but Type 1 is the pits.
It’s the less common kind – only about 15 per cent of diabetics have it and it’s not related to lifestyle like Type 2 can be.
No one knows what causes it, nothing can be done to prevent it or cure it, and if you don’t have regular insulin injections, you die.
To say your Grandpa and I have been worried out of our minds is an understatement.
Not surprisingly, your Uncle Paul hasn’t been feeling too flash either but he’s amazingly stoical and is getting on with the business of living with a condition that unlike many illnesses can at least be controlled.
For that we are extremely grateful because we love him very much.
To continue on the “keeping it under control” theme, I’m very pleased to announce that at two and a half you are in control of your bodily functions, with the exception of picking your nose and eating it, which we’ll have to train you to do in private if you’re not to grow up a social outcast.
But what the hell. You’re toilet trained! 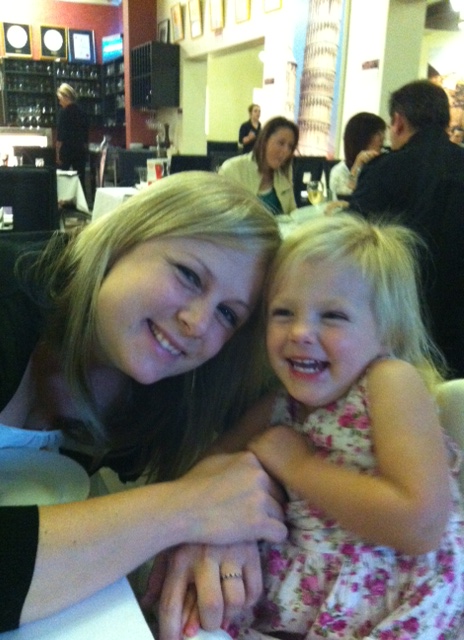 This picture was taken shortly after you and your Mum returned from the restaurant’s public conveniences. You are now fearless when it comes to toilets.

This is such a milestone and it’s really good for your Mum that it’s been reached before the arrival of your baby brother in May.
It was a short and highly successful campaign waged by the day care ladies and your Mum and Dad and helped along greatly by a special toilet-seat insert that allows you to sit on a proper toilet without dropping bum-first into the bowl and ending up in the ocean out beyond Capel.
These inserts hadn’t been invented when your Mum and Uncle Paul were little and, believe me, they’re a godsend because every little kid loves the challenge presented by a big toilet.
You particularly love your after-dinner session and will sit there for ages, singing and chatting to yourself and seeing how much toilet paper you can unroll onto the floor before someone catches you.
It’s a joy to witness and makes me think that we’d probably all feel a lot more valued if our Mums and Dads and Nannas and Grandpas could come into the toilet and clap and cheer every time we perform a bowel movement.
I’ve got no idea how I’m going to segue into a recipe after this discussion.
In honour of your Uncle Paul’s pancreas and your own bowel movements, I should probably post something healthy.
Instead I’m going to give you a recipe for Scallop and Leek Tart that I made for your Grandpa and I on the night of Good Friday.
It’s from the book A Consuming Passion by Michelin-starred New Zealand chef Adam Newell.

I love this book and I love Adam Newell.
The last time I wrote about a recipe of his he sent me a very nice email and I almost died of shock and amazement.
I’ll leave you his book in my will but I would suggest to everyone else that they buy it at Fishpond (a bargain at $25.95, hardback, free postage).
It goes without saying that my Scallop and Leek Tart was nothing like Adam Newell’s because I’m not a Michelin-starred chef, I didn’t make my own puff pastry, I didn’t have any saffron and I couldn’t find white balsamic vinegar for love or money.
That said, it was still bloody delicious.
Your Grandpa said it tasted like a scallop pizza only silkier and better and with puff pastry.
He means wells.

One year ago on this blog: Yorkshire Lasagne

SCALLOP AND LEEK TART AFTER THE FASHION OF ADAM NEWELL

To make the vinaigrette, put the tomatoes in a bowl and cover with boiling water.
Leave for a few minutes then peel, de-seed and chop the flesh into fine dice.
Brig the vinegar to the boil in a small saucepan, take it off the heat and stir in the balsamic vinegar and capers (and saffron, if using).
Let it cool then add the diced tomato, olive oil, salt and pepper.
Leave it to infuse while you get on with the tart.
To make the tart, preheat the oven to 200C.
Sweat the leeks in the olive oil in a frying pan (use a low heat) until they’re soft but not coloured. Season with salt and pepper, stir and cool.
Cut 15cm circles from each sheet of pastry and crimp the edges by pinching them with your fingers.
Put the pastry discs on a baking tray(s) and spread the leeks over the top, leaving a 1cm or so leek-free edge.
Put the whole scallops on top of the leeks in a single layer.
Bake for 10-15 minutes until the edges of the pastry discs are puffed and golden.
To serve, put some salad leaves and shaved parmesan on top of each tart, pile the rest of the leaves on the sides of the plates and drizzle the vinaigrette over the top and around the edge of the tarts.