Dear Amelia,
Here at party central there’s been quite a bit of Henry VIII “nastalgia” going on.
That’s because, while Foxtel can’t spell, it HAS been good enough to re-run the entire four seasons of The Tudors and it’s the absolute, hands-down best.
We missed it the first time it aired and now can’t wait for the repeats on Thursday nights. We’re like addicts waiting for a hit.
I’m especially hanging out for the next episode because I’m hoping it’s the one where Katherine Howard (the Queen) and Thomas Culpepper (Henry VIII’s manservant) get their heads chopped off.
I don’t often wish painful deaths on people because, as the owner of a cervix that has twice stretched to I’m-dying capacity (hi Paul, hi Kate), I’m well aware that when you mix extreme fear with extreme pain it’s not very nice.
But these two are so irritating I’d jump inside the telly and swing the axe myself if the opportunity presented itself.
Here’s a picture of the two of them getting ready to cuckold the King (as in, do the deed).

I know.
Are they insane? They’re cheating on a man who eats swans and beheads people at the drop of a hat.
Someone should have slapped them at this point and told them to pull their heads in, not to mention other bits.
I’m surprised they even had the energy for all this sex considering what they were shovelling down their throats on a daily basis.
Basically, truckloads of food.
I know this because I found a fascinating website called Historic Royal Palaces and it’s got all sorts of information on the kitchens Henry VIII built at Hampton Court Palace in 1529.
They were designed to feed the 600 or so members of his court twice a day and consisted of 55 (yes, 55) rooms.
Here’s how much Henry’s courtiers chewed their way through each year: 8,200 sheep, 2,330 deer, 1,870 pigs, 1,240 oxen, 760 calves and 53 wild boar.
These animals were then washed down with 600,000 gallons of beer (that’s 2,728,000 litres, or 95,719 middies), so I should imagine there was more than a bit of the old “pull my finger” thing going on around the palace and adjoining gardens.
I’ll now show you what a middy of beer looks like in case it’s extinct by the time you grow up.
You can see from the picture that when taken on a State-by-State basis, the beer situation in Australia is quite confusing.
Hopefully it will be sorted out by the time you grow up.

After visiting the Hampton Court Palace page, I was tempted to tackle an authentic Tudor dish but realised in the nick of time that spit-roasted boar just might be Nanna’s kryptonite.
I was nearly sucked in, however, by this recipe for something called Buknade:
Take veel, keed, or hen, and boyle hem in faire water or ells in good fress brot, and smyte hem in peces, and pike hem clene; And drawe the same brot thorg a streynor, And cast there-to parcelly, Isoppe, Sauge, Maces and clowes, And lete boyle til the fless be ynog; and then set hit fro the fire, and aley hit vp with rawe yolkes of eyren, and caste thereto poder ginger, and vergeous, & a litel saffron and salte, and ceson hit vppe and serue it fort.
I mean, given half the chance, who wouldn’t want to lete boyle til the fless be ynog?
In the end I decided to forego Tudor and go with Thai instead.
This recipe is for Thai Crab Cakes, which are more like fritters than cakes but are delicious all the same.
I’ve been making them for years and have yet to meet a person who doesn’t love them.
They’re from a book called The Night Before by Australian caterer-to-the-stars Victoria Lewis.
It’s now out of print but if you can find a copy online, grab it.
Victoria says of these Thai Crab Cakes, “Of all my recipes, this is probably the most sought after.”
Try them and you’ll know why.

Chop half the bunch of coriander and put it in a food processor.
Add the flour, milk, egg, seafood extender, 1 tbsp sweet chilli sauce, fish sauce and cumin and process until you have a smooth batter.
You’ll need to cook these in batches, so heat half the oil over a medium to high heat in a big frying pan.
Place teaspoons of the batter a reasonable distance apart in the frying pan.
When the crab cakes are lightly golden underneath (the top of them will have little bubbles), turn them and cook on the other side.
You’re looking at 2-3 minutes per side.
When they’re cooked, remove the crab cakes to a big plate covered with kitchen paper.
Add the reserved oil to the frying pan as it’s needed.
You can serve these immediately on top of a platter covered with lettuce leaves.
Scatter over the remaining coriander and serve with lime wedges and a bowl of sweet chilli sauce for dipping.
You can also keep them in the fridge for up to 48 hours, or freeze them for up to 1 month.
To reheat, preheat the oven to 200C.
Place the crab cakes on a baking tray and reheat for 5 minutes (longer if frozen).

Dear Amelia,
Just lately when we’re staying with your Mum and Dad, and Nanna rushes in to your bedroom in the morning to get you out of your cot, you sometimes get all pouty and stick your head under the quilt and say, “No!”
At first I thought it was because you were just being a little shit but then I realised it might be because when I get out of bed I look like this.

I took this picture at 8 o’clock yesterday morning after frightening myself when I looked in the bathroom mirror.
I’m not sure why it happens, this hair thing.
Your Grandpa says it’s a gift.
Personally I think it’s because of “product”, which looks like this. 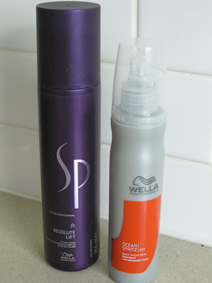 Back in the day, when Nanna was younger, bottles of stuff like this were called “hair care”.
They changed the name to “product” so they could start charging gullible people like me $35 a pop.
Things were a lot simpler on the hair front when Nanna was young.
A drop of Silvikrin shampoo or Sunsilk Lemon (for Greasy Hair), and you were set for at least a week. 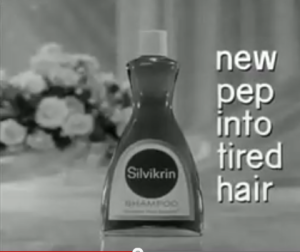 If you wanted to be blonde you just sprayed something called Sun Up on your head and stood out in the sun until you passed out and/or your hair was bleached to the desired shade of lightness.
OK, fluorescent yellowness.

This is a pretty scary photo isn’t it?
It’s because it was taken in 1973 (look at that pampas grass and the umbrella tree and the pink hibiscus – so 70s).
That’s your Great Aunty Pauline on the left looking gorgeous with her natural red hair.
The scruffy, long-haired bloke in the middle is your Grandpa and the girl with her nose in the air and bright yellow Sun Up hair is me.
I remember the day that photo was taken. I was dying to go to the loo and just seconds before had been shouting, “For God’s sake, get on with it!” (some things never change, do they?).
One thing that’s changed, though, is Nanna’s gall bladder.
It’s now home to a gallstone the size of a minor planet plus “a host of smaller ones” (sort of like a host of golden daffodils only round and brown).
My doctor told me that lots of people get gallstones, especially if they fit into the category called The Four Fs, which stand for female, fair, 40 and fat.
My doctor is a warm, witty and wonderful man but I must admit that when he came out with that one I nearly summoned up a fifth F and told him to fuck off.
Instead I advised him that I wasn’t fat when I was 40 and that even though I’m moving more towards the lard-arse end of the weight scale than the skinny-girl end, people had yet to start pointing and laughing at me in the street.
Luckily he had good things to tell me about my bowels and we were able to move on.
Anyway, I had my pre-admission appointment at the hospital this morning because in a few weeks my gall bladder and its various stones are being removed.
I’ve decided that the weekend before this happens I’m going to go out to a restaurant with your Grandpa and some friends for a Goodbye Gall Bladder dinner.
It will be nice not to have to cook but, if I had to, I would make these Gingered Chicken Cakes with Coriander Sauce.
If you Google the name of this recipe you’ll find it’s on caterer’s menus all over the world – probably because it’s so easy and impressive and delicious.
It’s from one of my favourite cookbooks – Diva Cooking: Unashamedly Glamorous Party Food by Victoria Blashford-Snell (yes, really) and Jennifer Joyce.
Unfortunately the book’s out of print but if you ever see it on eBay, grab it – it’s a little treasure.
I use 500g chicken breast mince instead of mincing 2 chicken breasts as directed in the recipe.
I also use bought mayonnaise instead of making my own (surprise, surprise). You’ll notice that these chicken cakes are the same colour as my hair when I was 20. How embarrassing is that? 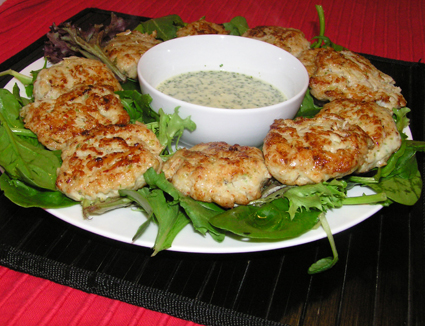 Make the coriander sauce by mixing together all the ingredients.
Cover with plastic wrap and put in the fridge until needed.
For the chicken cakes, put the chicken mince into a big mixing bowl.
Put all the remaining ingredients except for the oil and salad leaves into a mini food processor or blender and process until pureed.
Pour the pureed mixture on top of the chicken mince and mix everything together until well combined.
Form the mixture into patties – small ones for canapés, bigger ones for an entrée or main course.
Coat the bottom of a large frying pan with oil and cook them over medium-high heat for 3 to 5 minutes each side, until cooked through.
Drain the chicken cakes on kitchen paper and serve them on a bed of salad leaves with a bowl of sauce in the middle.
To eat, drizzle some sauce over the chicken cakes and salad.