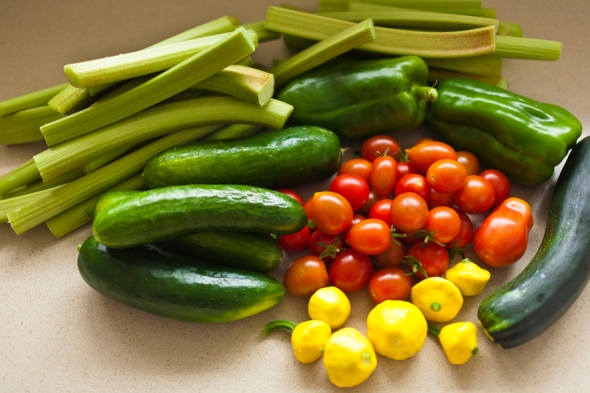 Dear Amelia,
Your stole your Mum’s mobile phone yesterday afternoon and rang my number quite by accident.
Then you said “hello”.
Actually, it was more like “hewoohhh” but it was good enough for me.
Your Mum told me it’s the first time you’ve said the word “hello”. EVER.
I suspect she says that to all the nannas but, whatever, I’m still sitting here thinking ‘be still my beating heart’.
I realise now that instead of talking to you for three minutes about what a beautiful, clever girl you are, I should have passed on some timely tips about vegetable gardening.
I’m not a hugely successful vegetable gardener but I’m pleased to say your Grandpa and I are actually self-sufficient at the moment if all we eat are tomatoes and eggplants.
Last summer we were self-sufficient in zucchinis.
I planted them because I had visions of stuffing the flowers with ricotta while I sang along to Dean Martin songs.
I never did and ended up instead with several thousand zucchinis the size of cruise missiles.
On the subject of gluts, this past spring we had roughly 7 million broad beans, which your Grandpa loves but I don’t because it takes forever to peel them and you end up being able to fart for Australia.
When we first came to Albany, before the garden was established, I used to buy all my veggies at the Saturday morning farmers’ market in town.
It’s expensive but the fruit and vegetables are fantastic and it’s THE place to go if you’re looking for lamb that’s had a university education.
These days I’m lucky enough to have a prolific vegetable grower living next door.
The picture at the top of this post is of the home-grown veggies our friend Richard passed over the fence last weekend.
It gets better: Richard’s wife, Lynda, is a farmer’s daughter and is kind enough to throw excess produce our way occasionally.
Lynda could really do with the help of Nigella, Rick and Elvis at the moment because the menopause is upon her and she spends a lot of her free time standing in front of the air conditioner in the crucifixion position.
But back to veggies: this year I planted mini Lebanese eggplants instead of the normal variety and they are quite bitter (maybe things are worse than usual in Beirut).
So I needed a recipe that was strong enough to mask any bitterness that was left after they’d been salted.
This is it and it’s really delicious. It’s adapted from a recipe by Dixie Elliott.

Heat oil over medium heat in a non-stick wok or big frying pan.
Add onion and cook for a few minutes, stirring, until it’s soft.
Add the garlic and curry paste and cook for a minute or two, stirring, until it’s aromatic.
Add the potatoes, eggplant, tomatoes and water, cover and bring to the boil.
Reduce heat to a simmer and check for seasoning – add salt if necessary.
Simmer for about 40 minutes until the vegetables are tender.
Chuck in the frozen peas five minutes before it’s finished cooking and let them cook through.
Just before you serve it up, stir in the coriander.
Serve with rice.