Dear Amelia,
As I write this, someone, somewhere in the world, is buying a copy of the erotic novel Fifty Shades of Grey.
It’s very famous at the moment, this book, because it’s sold 31 million copies in about five minutes.
That means there are 31 million people out there who know a lot more about bondage and discipline and S&M than they did before they ventured on to Amazon.com.
Nanna’s not one of them but, truth be told, she’s tempted.
The trouble is, I’ve heard the book is so badly written, I’m not sure I’m willing to fork out the ten bucks required to bring it home.
So I’ve more or less decided to wait until I can get a copy from Albany Public Library.
I just worry that by the time I do, all the pages will be stuck together.
Laugh if you like but I worry with good reason.
There was a story last week in our local newspaper, the Albany Advertiser, that since sales of Fifty Shades of Grey have gone gangbusters, so have the sales of sex toys at the local sex shop.
You know, sometimes I sit out on the deck at night, sipping a glass of Yellowglen and watching all the lights come on in the houses on the hill opposite.

I often wonder what sort of lives the people in those houses lead – what sort of things they get up to.
Well, now I know.
While I’m knocking back the fizz they’re pulling out their whips and strapping on giant dildos.
Who would’ve thought? Not me, that’s for sure.
The next time I see a cluster of people around the triple-A battery stand at Woolies, I’ll start wondering big time.
Are they buying them so they can listen to something uplifting on the ABC on their portable radios or are they planning a session with their shiny new vibrators?
And if it’s the latter, where are they hiding them from the kids?
We used to keep ours up the back of your Grandpa’s sock drawer.
I say “used to” because it got lost during the move to Albany four and a half years ago.
For months after the move I was worried sick it had ended up in one of the cardboard boxes we’d given to the Salvos, wedged down the bottom between the Rena Ware casserole dish and the Reader’s Digest Complete Do-It-Yourself Manual.
Then your Grandpa said it had probably ended up in landfill somewhere, and I must admit I felt much better knowing that it was underpinning one of Perth’s outer suburbs rather than causing a coronary in a soldier of Christ.
Speaking of Rena Ware, how stupid was I to give it away considering that it was totally vintage and therefore totally desirable in a totally non-sexual way?
Well, basically it was because it wasn’t big enough or deep enough to cook anything in, especially this Malaysian Chicken Curry, which is one of my favourites.
And seeing as it’s spicy, it sort of fits in with today’s little chat, doesn’t it? 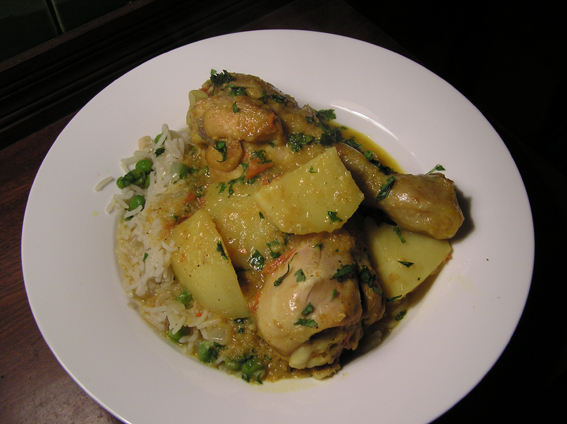 Preheat the oven to 180C.
Cut the onion into quarters and put it in a food processor with the garlic, ginger, chilli, tomato, curry paste and 1 tablespoon of the vegetable oil.
Whiz it all around until everything is reduced to a thick paste.
Mix the turmeric and salt on a dinner plate and roll the chicken drumsticks in the mixture to coat.
Heat the remaining oil in a big frypan over medium heat and cook the drumsticks for about 3 minutes each side, until golden brown.
Put them in an ovenproof dish that’s big enough to hold them in a single layer.
Reduce the heat under the frypan and add the onion paste from the processor.
Cook, stirring, for about 5 minutes or until it’s aromatic.
Stir in the coconut cream and bring it to the boil.
Pour this mixture immediately over the chicken, then tuck the potato pieces in between the drumsticks, pushing them under the sauce.
Cover the dish with a lid or foil and cook in the oven for one hour, turning the drumsticks over after 30 minutes.
Serve with rice.