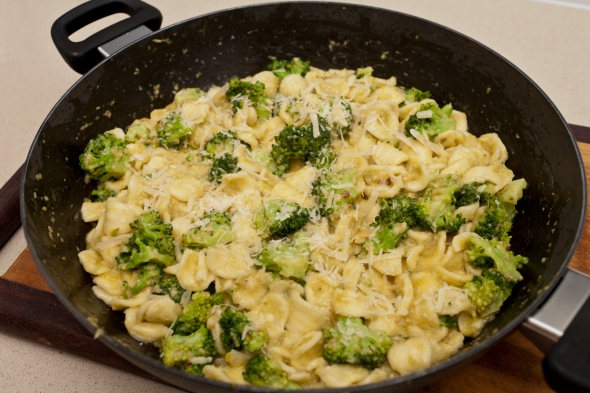 Dear Amelia,
Long story short: Nanna was once told by an Italian drug dealer that you should never fry your chopped garlic for longer than 30 seconds.
Just fry it until it’s fragrant, he said. No longer.
And because he had a gun in his bag, Nanna was inclined to believe him.
That was in Manjimup in 1974, when the local pub was like something out of The Wild Bunch and you never knew who you’d meet over a middy (but guess what – it was never William Holden).
For some reason  – possibly because I was terrified – I’ve never forgotten Mr I.D.D.’s garlic-frying rule and to this day I whip the frying pan off the heat the second the smell hits my nostrils.
Then I discovered a dish called Orecchiette with Broccoli, Anchovies and Chilli and realised that sometimes rules are made to be broken.
This dish is apparently a very old, traditional one and there are dozens of different recipes for it on the Internet.
Your Grandpa and I love it so much, I cook it every couple of weeks.
You need to use proper orecchiette, not the San Remo stuff.
Orecchiette means “little ears” in Italian and looks like this. 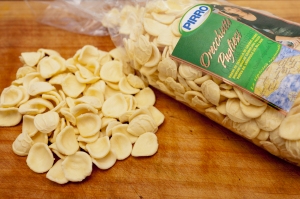 ORECCHIETTE WITH BROCCOLI, ANCHOVIES AND CHILLI

Put a big pot of salted water over high heat and bring to the boil.
Add the orecchiette and cook according to packet directions (the Pirro brand you see in the picture takes 18 minutes).
As soon as you’ve put the water on to boil, cut the broccoli into small-ish florets, reserving as much stalk as possible.
Put the florets in a saucepan of water, bring them to the boil, cook for 3 minutes, drain them, then run them under cold water to stop them cooking.
Put to one side.
Cut the broccoli stalks into chunks then put them in a food processor and process until finely chopped.
Heat the oil and half the butter in a big frypan over low heat and cook the chopped-up broccoli stalks, garlic, anchovies and dried chilli for 10 minutes, covered, stirring every now and then.
When the orecchiette is cooked, put a ladle of pasta water in the frypan, tip in the drained pasta, the broccoli florets, the remaining butter and half the parmesan cheese and stir until it’s all hot and combined.
Serve it with the remaining parmesan cheese sprinkled over the top. 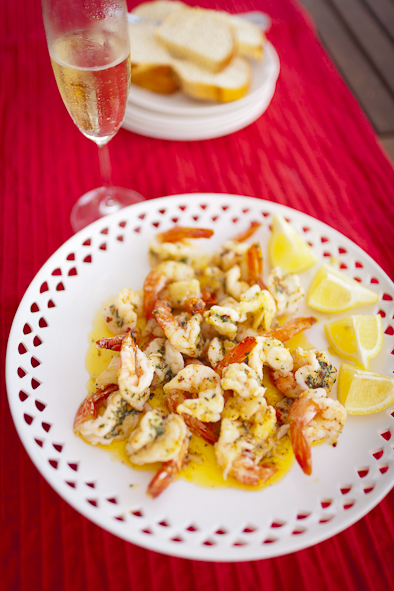 Dear Amelia,
I recently saw a restaurant menu that listed a dish called Prawns Two Ways.
In our house that would mean putting them in your mouth with your right hand AND your left, which we usually do anyway because we love prawns your Grandpa and I.
But it made me think that I should give you two of my favourite prawn recipes.
They’re my favourites because they both involve enough butter to harden every single artery in your body by bedtime, which is why they taste so good.
The first is a recipe for Garlic and Tarragon Prawns that I came across in a Donna Hay magazine I was reading at the hairdressers.
I didn’t feel comfortable tearing it out because I knew I’d probably get caught, so I had to hunt around town for my own copy.
It was in the 10th Anniversary edition, which unfortunately was sold out, but on the up side I now know exactly how many newsagents there are in our little corner of the Great Southern.
I eventually found the mag for free, would you believe, as part of a Donna Hay app for the iPad.
It was obviously in my stars that this recipe and I should be together so I cooked it for all of us for Christmas lunch while you were sitting in your high chair pushing bits of banana in your ear.
The prawns were so totally amazing that despite the fact I think Donna Hay looks disturbingly like Neil Perry (could they be the same person, do you think?), I wrote this grovelling little song for her.
You have to sing it to the tune of Hosanna, one of the hit songs from that old musical, Jesus Christ Superstar.
If you want to check out the original on YouTube, you’ll find it here.

Donna Hay Superstar
Ho Donna
Hey Donna
Donna Donna ho
Donna Hay
Donna ho
Don-naaaa
Hey DH, DH
Can I use crème fraiche?
Donna ho
Donna Hay
Superstar
I was telling a friend in Perth that I was cooking the prawns again on the weekend and she said, “You’re turning the OVEN on? TOMORROW? Are you INSANE?”
Seeing as the summer temperatures here in the deep south are always somewhere between marvellous and exceptional, I’d forgotten it’s so hot in Perth at the moment you could fry an egg on Eric Ripper’s head.
So I reckon if you’re suffering through a heatwave you could always cook the prawns in the garlic butter in a frypan instead of baking them (OK, you’d still have to turn on the oven to roast the garlic but it’s a small price to pay for such deliciousness).
By the way, I grow my own tarragon because that’s what Nannas do.
Feel free to substitute the dried variety, I’m sure it would be fine.

Preheat the oven to 180C.
If you’ve forgotten to take the butter out of the fridge, microwave it for 10-15 seconds to make it soft.
Place the garlic on a baking tray, drizzle with the oil and roast it in the oven for 20-30 minutes, until soft when squeezed.
While the garlic is roasting, butterfly the prawns by cutting down their backs (but not all the way through) and removing those stringy bits that are their intestinal tracts.
Spread the prawns out flat and put them in a single layer in a big shallow roasting pan (see pic at end of recipe).
When the garlic is cooked, increase the oven temperature to 220C.
Slice the top from the garlic bulb and squeeze the roasted garlic from each clove into a bowl.
Add the butter, tarragon, chilli, salt and pepper and mash everything together with a fork.
Top each butterflied prawn with some of the garlic butter and roast for about 8 minutes until cooked through.
Serve with lemon wedges. 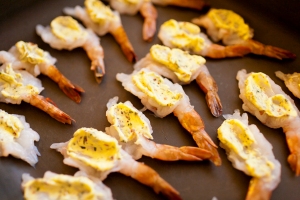