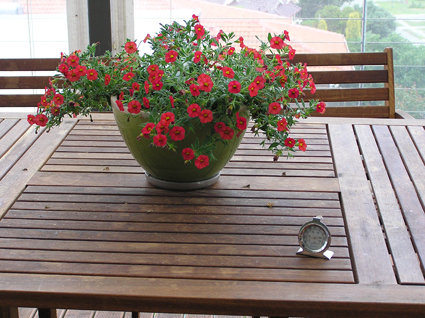 Dear Amelia,
The day will come when you’ll say to yourself, “Why haven’t I got a proper thermometer?”
That day will probably be a day like today when the temperature in the shade reaches 40C and it starts raining live spiders on your deck.
If it ever comes to pass that it’s raining live spiders on your deck, you’ll want to know what sort of temperature the deck roof has to reach before 50 over-heated spiders drop from their hidey holes ALL AT THE SAME TIME and dangle in mid-air.
Well, I can tell you now that it’s about 48C (which is 118F, which is bloody hot no matter which way you measure it).
It totally freaked me out, I can tell you.
It was as if Google maps had stuffed up the coordinates and decided to treat southern WA to the 11th plague of Egypt.
Or as if the Mira Mar contingent of the Albany spider population had decided to reenact the airborne invasion of Normandy.
Nanna actually screamed.
Luckily your Grandpa thrives on danger, so he braved the 50 spiders that were dangling at eye level, crawled to the outdoor table and put the oven thermometer on top of it so we could record the temperature.
Then he got the Mortein and sprayed the crap out of everything.
It occurred to me later that if you’ve got to have native wildlife dropping from the roof of your deck, spiders are probably better than brown snakes.
Funnily enough, your Grandpa wasn’t comforted by this observation.
All afternoon he’s been shuddering and brushing imaginary arachnids off his shoulders.

An Albany brown snake – click here to see the video. I hope this guy’s wife lost control of her bowels all over his Jesus-booted feet. What a moron.

This spider invasion wouldn’t have happened of course if I got off my bum more often and cleaned the deck roof with a long-handled broom.
I’ve never made any bones about my lack of interest in housework, but the raining spiders thing plus this news report I came across on CNN (Woman Loses Breast After Spider Bite – yes, honestly) has got me thinking I need to change.
Here’s a picture of how the deck roof looked when it was first erected.

Suffice to say it doesn’t look like that now (I’m too embarrassed to show you a picture).
Anyway, we were going to have a barbecue out there tonight, but while I’ve been writing this the weather has broken and it’s absolutely pissing down.
I was going to cook another recipe from that excellent cookbook, In the Mood for Entertaining, by Jo Pratt. 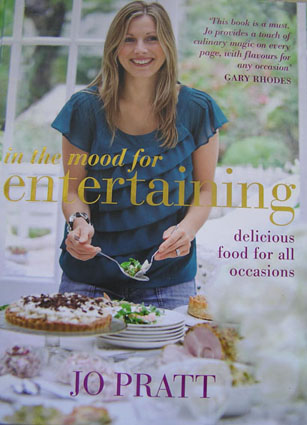 It’s supposed to be a breakfast dish (it’s the sort that would be spot-on if you were hungover) but it’s just as good on the barbecue for dinner.
As it stands, what with the spiders, the torrential rain and the general state of my nerves at the moment, we’ll probably have bacon sandwiches.

The original recipe calls for proper long sausages, each one cut on an angle into three or four pieces.
I did this and because they popped out of their skins a bit and curled up as they cooked, they looked like turds from one of your smaller breeds of dog.
So from now on I’m going to use chipolatas, which I prefer anyway.
Whatever you decide on, fry them on the barbecue or in a decent-sized non-stick frying pan in 1 tbsp of oil until they’re cooked and golden brown.
The recipe says this will take 5 minutes but I’ve yet to meet a sausage that cooks all the way through in less than 15, so bear that in mind.
Once the sausages are cooked, put them on a plate and keep them warm.
While they’re cooking, peel the sweet potato and grate it coarsely.
Put it in a bowl with the egg, season with salt and pepper and mix everything together thoroughly.
Divide this mixture into four and dollop it onto the barbecue or into the frying pan that the sausages were cooked in, adding more oil if necessary.
Flatten each dollop with your spatula to make four hash browns and cook them for 3-4 minutes per side until crisp and golden brown.
While that’s happening, heat 1 tbsp of oil in another frying pan and cook the tomatoes until they start to soften.
Add the caster sugar, balsamic vinegar and crushed chilli and stir everything together.
Cook over low heat for a few more minutes until the tomatoes are very soft.
To serve, put two hash browns onto each plate, top with the sausages then spoon the tomatoes over the top.
Sprinkle with the chopped parsley. This not only makes it look pretty, but also contains heaps of Vitamin C, which if you’re cooking this as a morning-after breakfast, apparently speeds up the metabolism of alcohol by your liver.
Serve with salad and some nice bread to mop up the tomato juices.

IN THE MOOD FOR ASPARAGUS

Donkeys eating what looks like a lump of wood but could possibly be a human leg.

Dear Amelia,
Here’s something interesting: a cockroach can live for nine days without its head before it starves to death.
I know this because I cleaned out my computer the other day and among all the folders with titles like “Invoices” and “CV” and “Superannuation”, I found a Word document titled “Weird Shit”.
There was a time, back when I was writing two newspaper columns and doing five breakfast-radio shows a week, that I used to collect weird shit, because basically with that sort of workload you needed all the help you could get.
Here’s some of the other stuff I’d written down:
Humans, on average, swallow eight spiders in their lifetime (this happens at night when they’re asleep).
A hundred people choke to death on ballpoint pens every year.
Donkeys kill more people annually than plane crashes.
If you’re over 50 you’re likely to have spent five years of your life standing in queues.
I spent what felt like five years in the checkout queue at Woolies yesterday but that was my own fault because I went there at half past two in the afternoon when all the mums were shopping for food before they picked their kids up from school.
Back when your Mum and Uncle Paul were little kids and broccoli was the official vegetable of Hell, Nanna often did the supermarket run at half past two in the afternoon and it brought back many happy memories watching these women fill their trolleys with vegetables that wouldn’t get eaten.
One vegetable that always gets eaten in our house these days is asparagus and seeing as it was on special I bought some.
This is how I cooked it and very nice it was too.
The recipe is from a really good book called In The Mood For Entertaining by English cook, Jo Pratt. 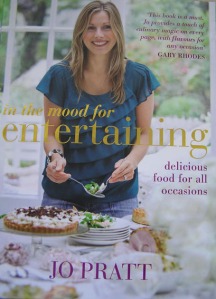 You’re supposed to blanch the asparagus in boiling water for a couple of minutes before you roast it but I couldn’t be bothered.
If you do boil it, make sure you pat it dry with kitchen paper before you put it in the oven.