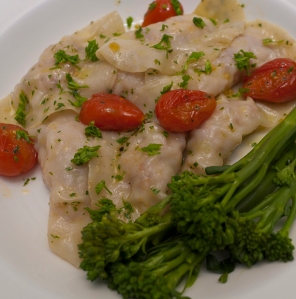 Dear Amelia,
More prawns! It’s the promised second recipe and it’s called Prawn and Prosciutto Ravioli.
I suppose it’s really a special-occasion dish because even though it’s not difficult, it does involve a bit of faffing around.
It’s also a Nanna creation, in that I combined about four different recipe ideas.
The garlic butter recipe is pinched from a top New Zealand chef called Adam Newell, who has won a Michelin star for his restaurant, Zibibbo.
Like all celebrity chefs worth their salt, Adam has an “absolute passion for food”.
At least that’s what it says on the fly-leaf of his cookbook, A Consuming Passion, which was given to me by your Great Uncle Gerard and his partner, Mignon, and is an excellent read.
In case you’re thinking of being a celebrity chef when you grow up, I should warn you that you will have to have “an absolute passion for food” every minute of every single day.
When you’re a celebrity chef, you’re never allowed to say things like, “I’m really tired and I couldn’t give a shit about the confit.”
Or, “Fuck seasonality. I want to eat strawberries in winter.”
You’re only allowed to say things like that when you’re like me and all you want to do is cook something nice, then eat it, then fall asleep in front of the telly.
A word on pasta machines.
I bought one 10 years ago and have never used it.
So, every time a chef on TV uses one to make pasta, your Grandpa says, “There’s a good idea, Michele. Why don’t you buy one of those?”
He thinks this is funny, but after 10 years it’s wearing a bit thin.
So I’ve decided that when I do use the pasta machine for the first time, I’m going to put your Grandpa’s fingers through the rollers.
In the meantime, I make ravioli with those wonton wrappers you buy in Chinese supermarkets (or, if you live in Albany, at Mariella’s Deli).
For this recipe I use the round gyoza skins so you get a nice half-moon shape, but if you can’t get hold of any, just use the square wonton wrappers and fold them into a triangle.
The ravioli are dead easy to make and just about everything is done in a food processor.
You can also make the garlic butter a day or even a week ahead.

For the garlic butter (don’t panic, you won’t use all of this)
100g butter, softened
100ml extra virgin olive oil
handful flat-leaf parsley
2 cloves garlic
salt and pepper to taste
For the ravioli
Packet of gyoza skins or wonton wrappers
500g raw king prawns, peeled
50g prosciutto (about 4 slices), chopped
1 spring onion
salt and pepper
Other stuff
20 or so grape tomatoes (Nanna grows her own)
Another handful of parsley, chopped finely

To make the garlic butter, put all the ingredients in a food processor and pulse until the parsley is chopped.
You won’t use all the garlic butter, so put what’s left in a tightly sealed container in the fridge.
It will keep for a couple of weeks and is great for garlic bread or on top of spuds or barbecued steak or fish.
To make the ravioli, wipe out the food processor bowl and drop in the prawn flesh and chopped prosciutto.
Pulse it until it’s all chopped up.
Finely chop the spring onions and mix them into the prawn mixture along with a little salt and pepper.
Fill a big pot with salted water and bring it to the boil while you’re assembling the ravioli.
To do this, first put some water in a small bowl.
Next, lay a gyoza skin on your chopping board and put a heaped teaspoonful of prawn mixture in the middle (see pic at end of recipe).
Dip your finger in the bowl of water, wet around the entire edge of the skin and then fold it over and press the edges together tightly to seal, pressing out any air as you go.
Repeat until all the prawn mixture is used up.
Cook the ravioli in the pot of boiling water for about 3 minutes.
While they’re cooking, fry the tomatoes in a big frypan in a little of the garlic butter.
When the ravioli are cooked, fish them out with a slotted spoon and put them in the frypan with the tomatoes, along with as much of the garlic butter as you think your arteries will stand (basically you need just enough to coat the ravioli).
Heat everything up for a couple of minutes then serve in big bowls sprinkled with the extra chopped parsley.
This is really nice eaten with broccolini. 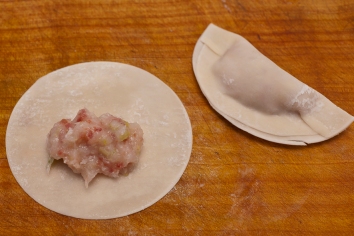