Dear Amelia,
Further to my Mother’s Day letter, here’s the latest picture of Blue Ivy’s feet.
I worry she’ll be the only child in the history of the world to grow up afraid of the light.

Dear Amelia,
This picture arrived in my inbox yesterday from my mate Martha Stewart.
The accompanying text said, “This Mother’s Day, pamper Mom with a handmade eye mask that includes a message from you.”
I think my message would be, “Wake up, Grandpa! Nanna wants to scare the crap out of you,” but maybe that’s just me.
Here are some more craft suggestions from Martha in case you can’t make it down to the deli today to buy Mom a bunch of flowers.
You will find all of them (and more) at marthastewart.com.
A balloon bouquet. 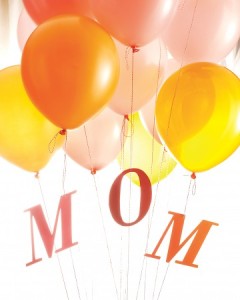 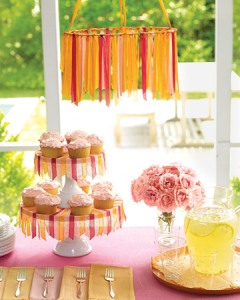 Tissue-paper floral pompoms that might fall on those tealights and burn the house down if you drink too much and go to bed without blowing out the candles.

Next is a picture of something your Mum made me at school for Mother’s Day when she was a little girl (it’s Nanna, your Mum and your Uncle Paul made out of honky nuts).

And here is a picture of something your Uncle Paul made me at school for Mother’s Day when he was a little boy.

There’ll be lots of phone calls and chatting today because no one who works full time wants to drive an 832km round trip to say Happy Mother’s Day in person (we’re a sentimental bunch).
After all the chatting I’ll be knackered but I’ll soldier on and make something out of the quinces that I picked off the trees I planted three years ago.
According to Australia’s Homemade Jam and Preserves Book, which is sitting next to me as I type, the ancient Greeks used quinces as an antidote for hangovers, poisons, upsets and fevers.
Who would’ve thought?
My quinces have been ripening in a box for weeks and are covered in scabby bits but they smell beautiful and should be fine for quince paste or jam or something.

If I’m feeling particularly Martha-ish, I might also pick the lillypilly berries that are growing on the hedge at the bottom of the garden and make some lillypilly jam.
As if.
But here’s a recipe anyway.
PS: There’s only one more week left of this latest full-time-work stint at the ABC, thank Christ.
No more getting out of bed at 5.30am.
Plus, Grandpa and I will be able to come and visit everyone. Yay!

Wash the lilly pillies well. Peel and core the apples, then chop into small pieces.
Put lilly pillies, apples, lemon juice, water and sugar in a small saucepan and slowly bring to the boil over a medium heat.
Reduce heat to low and simmer for 45 minutes.
Add more lemon juice if the mixture does not appear to set.
Use a potato masher to break the skin and seed from the fruit.
Strain mixture to remove skin and seeds.
Return pan to heat and, when reduced, use a stick blender to combine.
Set aside to cool, then refrigerate.
To store, pour into hot, sterilised jars and seal when cold.
This recipe is from Better Homes and Garden magazine.
If I make it and it doesn’t set, I’ll use some JamSetta, which you can buy at supermarkets. 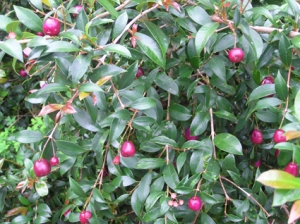 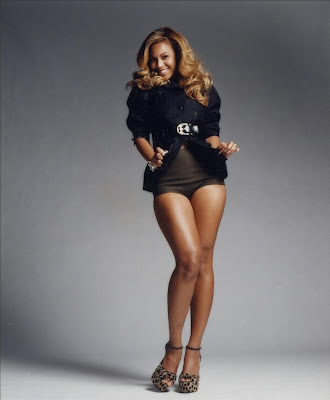 Dear Amelia,
I was lying in bed this morning thinking about Beyonce’s pelvic floor.
It’s Mother’s Day tomorrow and I was thinking that if I had never been a mother, I would never have ended up with you.
Then it occurred to me that if I had never been a mother I also wouldn’t wet myself when I sneeze.
Then I wondered if Beyonce is doing her pelvic floor exercises on a regular basis.
Let’s hope so or she’ll end up like me.
It’s Beyonce’s first Mother’s Day this year.
I wonder if she’ll get a cup of tea in bed.
If she does, it won’t be made by her daughter, Blue Ivy, because Blue Ivy is only four months old.
Plus, Blue Ivy is too busy getting her feet photographed.
She has the most photographed feet in the world. 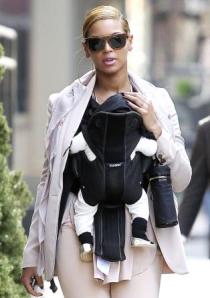 I often wonder what celebrities do on days like Mother’s Day.
Take the Real Housewives of Orange County for example, whose real hair colour can only be discerned by looking at their pubes. 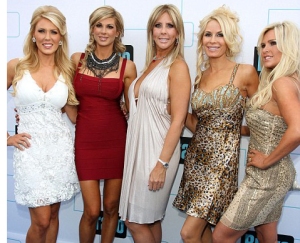 Do they put on a big communal barbecue down at the park so their kids don’t have to go through the trauma of trying to tell them apart?
Or do they think, “Mmmm, I wouldn’t say no to Nigella’s One-Pan Sage and Onion Chicken and Sausage for dinner.”
Which is what I would think, so here’s the recipe.

1 lemon
1 lge onion, cut into eighths
one-third of a cup of olive oil
2 tsp English mustard
1 tbsp dried sage
1 tbsp Worcestershire sauce
freshly ground black pepper
1 whole chicken cut into 8 pieces (save the backs for stock or chuck them out)
or
8 chicken pieces (must have bone in and skin on)
8 chipolata sausages

Cut the lemon in half, squeeze out the juice, then cut each half into quarters.
Put the lemon juice and the 8 pieces of rind into a big zip-lock freezer bag with the onion, olive oil, mustard, dried sage, Worcestershire sauce and a few grinds of black pepper.
Squelch everything around in the bag until it’s well mixed.
Add the chicken pieces and squelch it around a bit more.
Seal the bag and put it in the fridge to marinate (overnight is best but four hours is enough).
Pre-heat the oven to 200C.
Put the chicken in a big roasting pan, skin-side up, and tip the remaining contents of the bag evenly over the top.
Roast for 30 mins then add the chipolata sausages, tucking them around the chicken pieces.
Cook for another 45 minutes, turning the chipolatas over after 20 minutes so they brown evenly.
Serve on a big platter (chuck out the roasted lemon rinds if you want but they actually taste really nice).
This recipe is cooked at a lower temperature and has less oil and sage than the original recipe, which you’ll find at nigella.com or in her book, Feast.
I also use chicken pieces (thighs and/or drumsticks and/or wings) because I find the chicken breasts from the whole chook get too dry.
Thighs are the best, as Beyonce would no doubt agree. 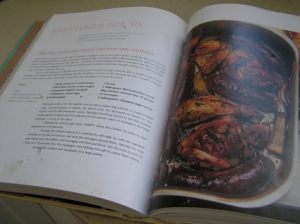