MARMALADE, MARTHA AND ME

Dear Amelia,
It’s twenty past eight on a quiet Albany night and I’ve just finished talking to your Mum on the phone.
When she rang I was passed out in front of Location, Location, Location and, no, I hadn’t had a drink.
Basically I’d slipped into a coma while watching a couple in their 20s try to decide which house they’d like to spend their $1.25 million on.
They were really irritating plus I’d had a full-on day at work and I was knackered.
The pace was absolutely furious today plus five times I’d answered the phone with, “ABC Radio, Michele speaking” and five different people on the other end of the line had said, “This is the number for Fletcher’s Abattoir.”
And I’d said, “No it isn’t” and they’d said, “Yes it is”.
By the fifth call I was crossing myself and wondering if I’d moved into a parallel universe.
Your Grandpa is in Perth at the moment hoping the periodontist he’s seeing tomorrow can save his back tooth for a reasonable amount of money (ha!).
According to Google, the average periodontist salary in San Antonio, Texas (I couldn’t find one for Perth) is $77,000pa, which isn’t exactly mega-bucks, is it? Maybe that’s why they have to charge so much – so they can put the occasional vat of caviar on the table.
Anyway, because your Grandpa is in Perth staying with your Uncle Paul, I had two pieces of toast and marmalade for dinner.
Here is a picture of it in case marmalade is extinct by the time you grow up. 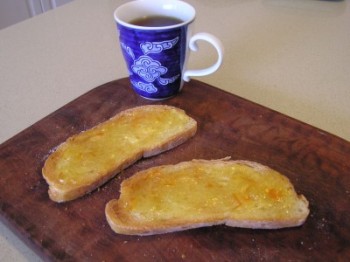 Your Grandpa and Uncle Paul had dinner tonight at the Queens and they ate slow-roasted belly of pork, the bastards.
I know this because before they ordered off the menu, they rang to ask me what tat soi is.
Here is a picture of tat soi for future reference, and also one of the Queens, which is in Highgate, and may also be extinct by the time you grow up.

Luckily, while I’ve been writing this, I’ve received an email from Martha Stewart telling me how to make gilded bookends out of two house bricks, so my night is salvaged.

If you’d like to try this yourself, you’ll find the instructions here.
Once I’ve finished gilding my bricks, I’ll go to bed and pass out again.
I’ll be seeing you again in four sleep’s time. Needless to say, I am very excited.