SALAD, 60TH AND THE YEAR OF THE SNAKE 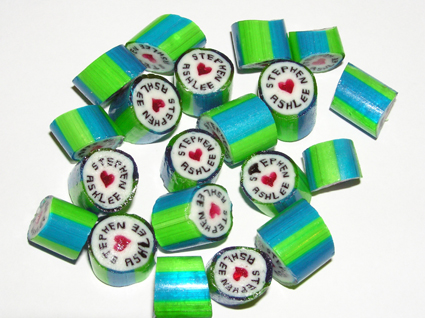 Dear Amelia,
Seeing as I cooked Peking Duck for Australia Day, it sort of makes sense that I made something Greek to mark the start of the Chinese New Year yesterday (it was a lovely watermelon and feta salad that I’ll tell you about in a minute).
It was a big week this week, particularly for Stephen and Ashlee whose wedding we went to on Saturday out at Emu Point.
Beautiful setting, beautiful ceremony, big party afterwards, with enough food to feed an army.
Ashlee is the fourth and youngest daughter of our friends Richard and Lynda, and the third to get married.
Three down, one to go, as practically everyone at the wedding pointed out.
Lynda and Richard are doing remarkably well, considering.
They are occasionally incapable of speech – sometimes even of movement – but otherwise they are fine and no longer slip into a catatonic state when the words “wedding speech” and “bank balance” are mentioned.
This is a big week for me too, not only because I was born in the Chinese Year of the Water Snake, which has come around again this year, but also because it’s my 60th birthday on Friday.
I’ve noticed just lately that a big thing in the “lifestyle” blogging world – particularly among so-called mummy bloggers – is to come up with a weekly “gratefulness” list.
This is basically what it says it is: a round-up of things for which the blogger is grateful, most of them deep and meaningful, many of them nauseating.
On a personal level, one thing I would be really grateful for is if these bloggers would stop using the word “gratefulness” (which grates on me the way “healthful” does) and use gratitude instead.
That aside, during these last few weeks of being 59, I’ve been trying to be grateful for all sorts of things that show me up for what I am, which is basically an almost-senior.
I’m trying very hard to be grateful that my arse is slowly slipping down the back of my legs, mainly because I know that when it stops it will mean I am dead.
I’m trying to be grateful that my soon-to-be-delivered Seniors Card will get me $100 off a stone monument if I choose to be buried in the Kalgoorlie cemetery, but only two bucks off a bottle of wine if I buy it at one of the six wineries listed in the Seniors Discount Directory. 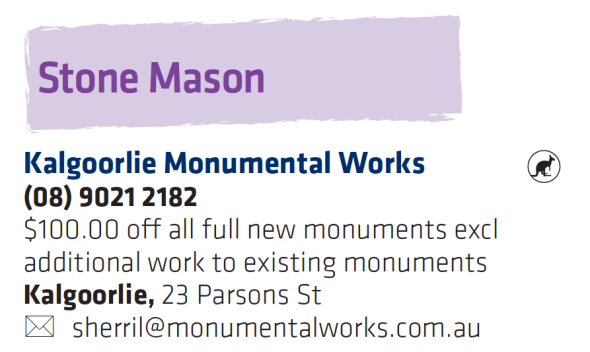 I’m also trying to be grateful that the veins in the backs of my hands are starting to stand out like little blue ropes.
People who are born in the Year of the Water Snake are supposed to carry something blue with them at all times during 2013 so that they can ward off evil spirits.
I can only hope that veins count.
On a more serious note, my Dad and sister both died at 56 so I should say that I’m extremely grateful I’ve got this far and have been blessed with a terrific life filled with some lovely people.
I’m also extremely grateful that at the end of the week your Grandpa and I will be spending three nights at the Hilton in Perth. 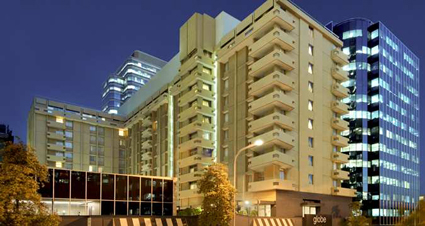 We will be able to celebrate our socks off as my 60th year slips away and I embrace the 61st with as much enthusiasm as a hangover allows.
We will be seeing you there, of course.
I know you’re only two and a half years old and therefore too young to retain memories.
But I live in hope that when you grow up you’ll have happy little flashbacks to my 60th birthday celebrations every time someone uses the words “Nanna” and “Bollinger” in the same sentence.

One year ago on this blog: Spiced Roast Chicken with Couscous 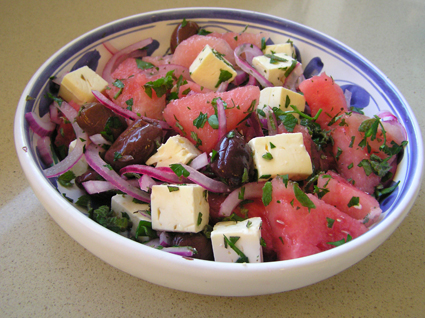 half a watermelon
feta cheese – a 200g packet should do
1 red onion, cut in half then sliced very finely
juice of 2 limes
a handful each of chopped fresh parsley and chopped fresh mint
a handful of pitted black olives (optional)

You’ll find versions of this salad all over the Internet but I like this one by Nigella.
It’s an amazing and very refreshing combination of tastes – perfect for the latest heatwave that WA is experiencing at the moment, except of course for Albany, which had a maximum in the mid-20s today while Perth was sweltering at 40C.
First you put the sliced red onion in a small bowl and pour over the lime juice.
While it’s marinating, cut the watermelon into chunks and put them in a salad bowl.
Sprinkle over the cubed or crumbled feta, the chopped parsley and mint, the black olives if you’re using them, and then the sliced onion and lime juice.
Stir it around gently to combine.
Serve with barbecued meat.